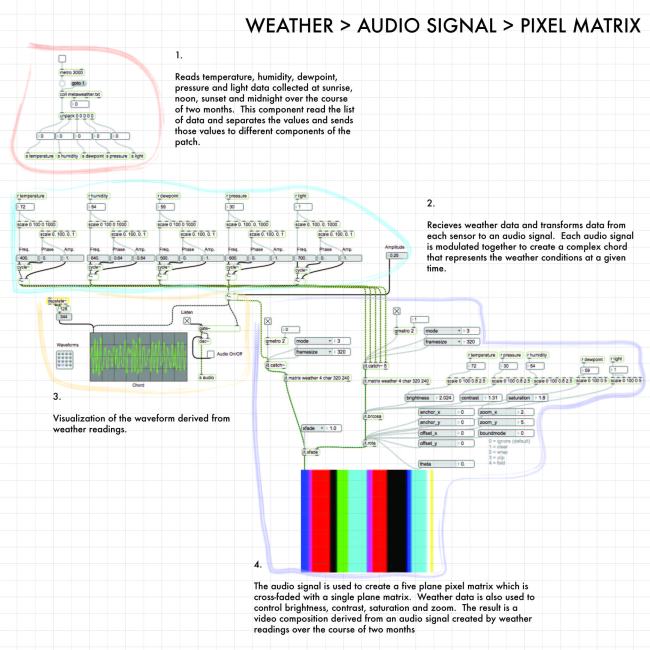 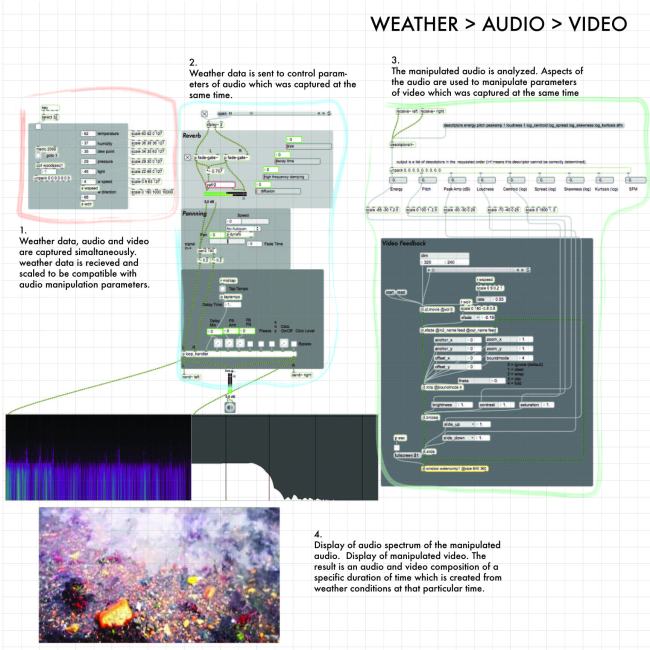 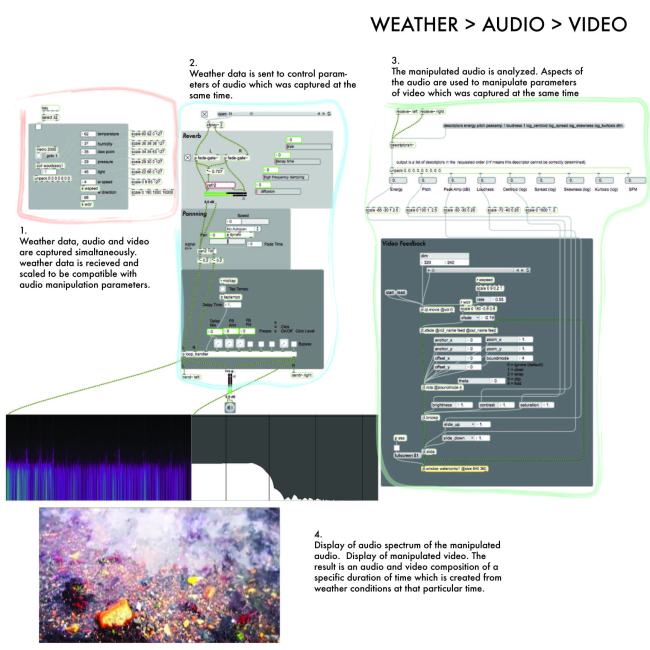 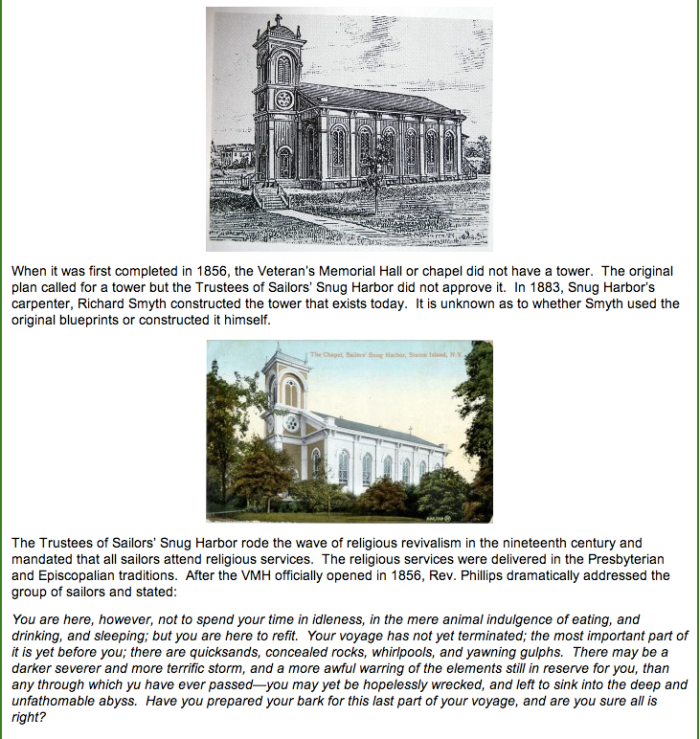 I was able to get into this gorgeous building, which is now used as a theatre, to conduct some recordings recently. In thinking about human relationships to different environments and recording data mainly outdoors, I had decided to conduct an experiment indoors.  The experiment involves using the visual and acoustic qualities of the space and manipulating them based on weather conditions outdoors.  The first step was to record the sound of the room.  I had conducted a four channel audio recording from the upper balcony. The goal was to capture the ambient sound and raw resonant frequencies that the building possessed.  I had then played back that recording into the space from the stage.  Live weather data from my station outside of the building was used to control varying qualities of the sound.  Each weather sensor controlled specific functions in custom written programming which include panning, pan speed, pan fade amount, reverb size, decay time, high frequency damping, diffusion and delay time and feedback filter controls of a looping modulating delay.    Basically, external weather conditions directly influencing the acoustic properties of an interior.  Give it a listen:

The second stage of the experiment was to create a similar experience visually.  A short video of the hall looking out from the stage was recorded and then projected back onto itself, matching up the architectural features to the physical ones.  Weather data is used to control parameters of video feedback.  Here is a short segment from the footage.  Note the lighting was not ideal, and I will be creating a higher quality version for the final installation.

The top image is the rest of my sensors to calculate wind speed, wind direction and rain collection.  I will be using these in addition to the board of sensors I already have been using to create future projects for the final exhibition.  The second image is of paper models I have constructed that will be the forms of three weather stations I am currently in the process of building.  Each station will be in separate locations that will survey the different environments that are nearby and constructed out of materials of each location.  The center shape, an icosahedron, a platonic solid often associated with water, will be located by the Snug Harbor dock and constructed of driftwood lashed together.  The cuboctahedron on the right will be located in the woods and built of fallen trees in the area.  The sphenocorona will be located at the cottage I am living in built of scrap architectural materials.  As I take weather readings in each location, I will also be conducting audio and video field recordings simultaneously.  The collected information will be used to create audio and video compositions that examine how each location blends with each other and where human actions fit amongst the nature.

In the coming days I will be exploring architectural acoustics in regards to weather conditions, hacking cassette players and working on unique signal processing for an upcoming multimedia performance.  So stay tuned.

I have been using my weather station to record  data at four times of the day; sunrise, noon, sunset, midnight.  The data has been logged and each stream of data from each sensor (temperature, dewpoint, pressure, humidity and light) is stored in individual coll files.  This patch reads out the individual lists of data and assigns values to the frequency, phase and amplitude of a waveform, generating five unique tones from each individual sensor reading.  The metro object at the top of the patch controls the speed at which the data is read, in this case changing the tone every three seconds.  All five tones are then modulated together to create one complex tone that cycles at the same speed.  The waveform is then visualized in different ways.  The first two are standard wave and histogram displays.  The last is a bit more complicated.  The data generated from the waveform (which is generated from the weather) is used to control the display of pixels within a jitter matrix.  By changing the resolution, I am able to control the variety of patterns created.

This series of images was an experiment that mixes two images of the same place using subtle feedback techniques.  The parameters of the fed back mix are determined by weather conditions read at the moment the images were captured.  One image is a painting and the other is a photograph.  This was inspired by Cezanne and how he approached painting by trying to capture an image exactly how it is seen with the eye, and not the ideal of how it should be captured by the mind or a camera.  Although I am not much of a painter, I was interested by these concepts of perceptions and ventured to include environmental conditions to distort the visual experience.  To create the triptych  data from temperature, pressure and humidity were assigned to varying paramters. 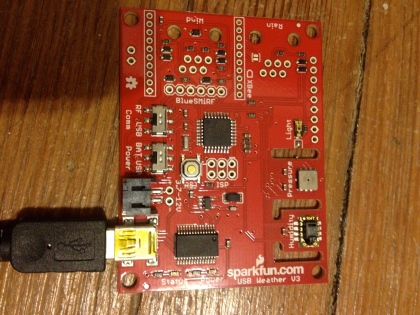 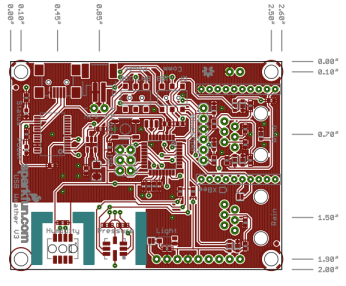 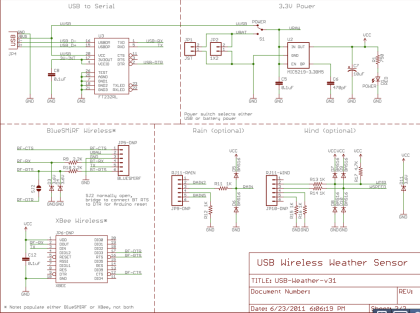 Got this guy up and running.  This compact sensor takes readings for temperature, dewpoint, humidity, pressure and ambient light brightness  and is programmed to display a menu in the serial monitor to set altitude, calibrate individual sensors and change readout between CSV, ASCII and format for and LCD screen.  Pretty awesome little instrument!!

For those of you that are not familiar with my previous work you can check it out here: cargocollective.com/kevindejewski

For the next two months I will be creating work that is generated from collected weather data as well as audio and video field recordings.  I often approach making a piece as an experiment.  It has a set of parameters and each parameter can be mixed and combined in an multitude of ways, and the experiment is done when each combination is exhausted.

The proposal that I had written earlier this year was focused on using weather to generate something positive.  Hurricane Sandy had wrecked an overwhelmingly amount of Staten Island and I wanted to use the same force that had taken people’s homes and businesses to create a positive experience to share with Staten Island residents.  The original proposal had involved using salvaged architectural material to create interactive instruments.  I had always been interested in integrating sound and sculpture for a multitude of reasons.  My thinking was that sound and music are often crafted in a similar way to sculptural collage where components are cut, rearranged and assembled in a harmonious manner. Throughout history, artists have utilized recombination and collage to create powerful cultural movements. Jazz, t had taken elements of blues, slave songs and European musical theory to create entirely new ways to think about music structure. Dada artists had taken language apart to its base elements to create new ways of communication that challenged the destructive nature of the Western World during the first World War. And artists working within methods of Postproduction, resource, resample and reconfigure materials to establish new artistic languages. My goal was to create something that re-contextualized the damage from the recent hurricane and serves as a platform for cultural stimulation.

From when I wrote the proposal to now, I had created some work that was exploring how we define three dimensional spaces with the use of audio and video installations.  I had become interested in this idea of using the environment as the material and changing how it is perceived.  And I had thought, well thats what I want to do with the work at Snug Harbor.  I want to use the environment (a post hurricane city in the midst of recuperating) to change how it is seen, to inspire residents as they are rebuilding to consider a harmonious relationship with their environment.

By using weather and audio as my materials, which are intangible materials, I plan to sculpt an environment that is directly generated from itself while exploring concepts of time, acoustics and visual psychology while I experiment with new ways to process an array of signal data.

So here is the cottage I will be staying in for the months of October and November. Snug Harbor had begun as a place for sailors to retire and these cottages were used to house various administrative members

So, I usually don’t blog.  I’m not a blogger.  In fact, part of me feels as if blogging is a thing that is a bit out of hand, for everyone with a slight interest in a certain category and has internet deems themselves an expert and somehow feels that they have something important to share with the entire world.  Well, before this turns into a salty rant about the human ego…..

The reason I am making this blog is to give those who are interested, a glimpse into the artwork I will be making during my residency at the Snug Harbor Cultural Center. www.snug–harbor.org led by the incredible Visual Art Director, Patrick Grenier.

construct
Create a free website or blog at WordPress.com.